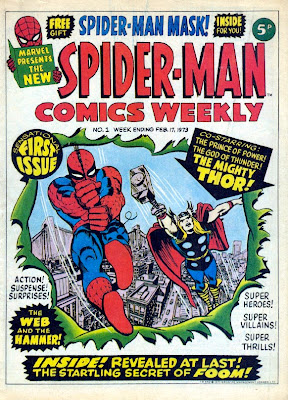 My comic book posts have been fairly DC centric, but the first superhero I encountered in my formative years and who I still hold a literary torch for is Spider-Man. It was probably because of Marvel UK publishing their Spider-Man weekly title that I met the wallcrawler, and then subsequently the broadcast of the first animated series in the UK in the 70s, which was closely followed by the live-action films and TV show starring Nicolas Hammond as Peter Parker/Spider-Man.

The character is the Everyman, given power accidentally and using it as a force for good. His life isn’t perfect by any stretch of the imagination and he’s been put through the ringer countless times in both his personal and “professional” lives, but he gives it all he has and triumphs, bringing hope to us all. Then he picks up his books, or pulls on the mask and goes again.

Truly a classic character who has transcended successfully from page to screen; a bookish nerd who comes good.

Don’t we all want to be him?